Athens, Greece: Peaceful coexistence between Christians and Muslims in the Levant: The basis and the necessity to stay

Athens, Greece: Peaceful coexistence between Christians and Muslims in the Levant: The basis and the necessity to stay 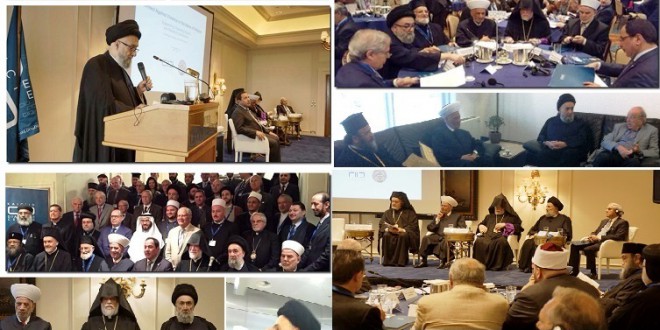 Speech of H.E Sayyed Ali al-Amin at the International Conference in Athens, Greece for (Supporting of Citizenship Rights and peaceful coexistence between Christians and Muslims in the Middle East) : 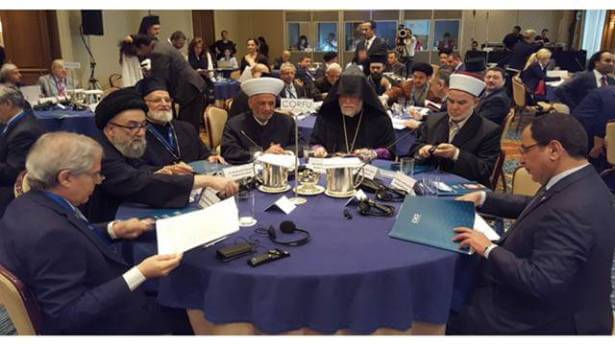 Peaceful coexistence between Christians and Muslims in the East:
The basis of  construction and the necessity to stay

They were and are still in their places of coexistence as one family where its members having religious or political diversity.

History tells us about the the first relationship between Christianity and Islam, where it happened when Islam was trapped and hunted in Mecca, and when new believers were traumatized because of their belief in the new spiritual message where they  went out from  paganism and polytheism to the worship of one God, so the Prophet recalled them that time to migrate and go to Abyssinia, which was ruled by Christianity, he said to them:  (Go to Abyssinia, there exists a king where people are not oppressed in his presence. )


And how similar these nights are to yesterdays!

In these days, Muslims and Christians are fleeing from their homes together, searching for countries to accept their accommodation.

The vibration that hit the formula of coexistence these days, is an intruding and emergence situation carried out by a platoon in Iraq and Syria who repudiated ties of history and homeland, and went out on the principles of religions that calls for tolerance and human dignity, where it hit Christians and Muslims and others in its brutality  and harm.


I assure it is  an intruding emergence and anomaly curious from the Islamic and Christian values, and it will not survive even though it has to be faced.

One of the reasons for its emergence and spread, was the weakness of states where it existed. Not only weakness in security and military level, but also in the political system’s inability to establish a state on the basis of full citizenship, and lack of vision for facing  the culture of extremism by educational and learning system programs, and this weakness has allowed these groups to control large areas and to work in spreading the culture of hatred and hostility between the peoples of the region and hit the formula of peaceful coexistence in the world.

There is no doubt that this phenomenon did not receive the necessary confrontation from the international community, which part of it considered that what is happening is a kind  of an internal conflict that overstrains the feuding on their land without the harm to reach up to viewers abroad.

But events proved the contrary, and that the danger and the damage goes beyond the borders of the Middle East to spread terrorism in more than one place in the world.


This phenomenon that is targeting our homelands and our coexistence, we must confront it, Christians and Muslims, by insisting on co-existence and by demanding reforms that reinforce the rights of citizenship, and in education systems which helps to spread the culture of tolerance and moderation.

The logic of tyranny, injustice and despotism that leads for this migration and displacement, are these authoritarian regimes that did not originate from the rules of citizenship and humanity that  equals between all citizens, and it  was one of the reasons for the birth of extremism and terrorism groups.

Our duty is to seek  to achieve the reforms which  assess the civil state that preserves the rights of citizenship equally without discrimination in their religious and political affiliations, and our strive must  continue for our people to remain in their home countries and regions.

The spreading of religious values that calls ​​for tolerance and peaceful coexistence among the various religious and cultural components, is the duty we have to work it and to call for the development of educational curricula and convert the speech of moderation and tolerance to a book learned by students in schools, universities and religious institutes in our region and the world.

It remains to say that the logic of humanity brotherhood in the east, is what constitutes the basis of the renaissance and our exit from the temptation of extremism and terrorism, as the poet  Rashid Salim Al Khouri said:

(O my people, this is a Christian who reminds you :

only our brotherhood love that rises the Levant)

And We say to atonement and terrorism groups that want to sow by its terrorism, hatred and enmity between us:

(An eon we lived together in this East :

and other than Love we won’t accept as religion)

What is needed from the international community is to help us to extinguish the fire of wars and conflicts that are ongoing in the Middle East, because the wars and conflicts are the ones that make hatred barriers  between peoples and fuel extremism and terrorism that works on hitting the formula of peaceful coexistence between the peoples of the region and in the world.

Finally, I thank those in charge of the conference, the Ecumenical Patriarchate and the King Abdullah Center for Dialogue of religions and cultures, and also i thank the Hellenic state the sponsor of this conference and wish you all success.


*  Speech of H.E  Sayed Ali al-Amin in the International Conference  (Supporting citizenship rights and peaceful coexistence between Christians and Muslims in the Middle East), which was held in (Athens, Greece) between 2 and 4 September 2015
Source:Aliwaa newspaper – Beirut -Tuesday 08/09/2015