Christians and Muslims for the sake of human dignity

Christians and Muslims for the sake of human dignity 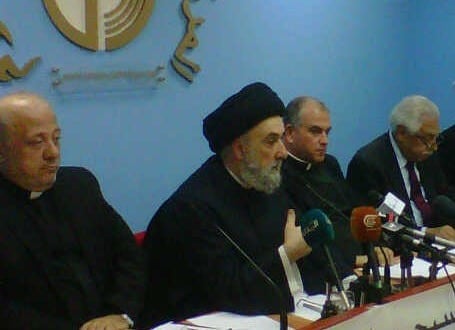 Speech of H.E Sayyed Ali El-Amine, in the Catholic Information Center – Lebanon, at the launching of the document: Christians and Muslims for the sake of human dignity

…. The first relationship between Christianity and Islam,  when Islam was besieged and chased in Mecca, when believers of the new Message were harmed and disfavored and they went out of paganism and polytheism, so Prophet Mohammad peace be upon him and his family, pointed to them at that time to go to Abyssinia, which was governed by Christianity so he told them: ( Go to Abyssinia, there exists a king where none of people are oppressed under his rule ).

Qoraan mentioned the link between Christianity and Islam, when he told them: (Romans have been defeated in the lowest land and they, after being vanquished, shall overcome) 30:2-3, Romans were carrying Christianity, they were defeated that day by the Persians who were pagans, and Quran told the believers that Romans will win after that defeat: (And that day believers will rejoice in Allah’s victory..) 30:4-5 This faith which gathered the Messages, is the faith in God Almighty.

We in the Arab Eastern region, do not consider ourselves two: “us” and “them” or “we” and “they”, we are one family who descended from the same family, whose members and sons have diversified religiously or politically. We all are one nation in this East even if the ones belonging to it have diversified religiously or politically.

The immigration that is raised up today and which we are trying to address and face, is not actualy limited to Christians but is generally happening to Christians and Muslims, and this  popped-up through systems’ practices that made the stand at the gates of embassies as the hope of salvation and escape, as if a lot of these rulers want to govern a country without a people through the logic of tyranny and through injustice. What pushs for this migration is the authoritarian regimes that do not proceed from the rules of citizenship and humanity that equals between all citizens and which we should strive to it in order to fasten our children and our families and our people in their home countries and regions. For this, the visit of His Holiness the Pope in these conditions, to entrench in ourselves this co-existence which extended for centuries and generations and was founded by parents and grandparents in our region. He Is coming for consolidating these values ​​that we have lived in our home land Lebanon and the entire Arab region.

Therefore we welcome very much this blessed visit, which is for the enhancing of religious values ​​and principles of tolerance between different religious components in the Arab region and always pours in the enhancement of this unity and this familiarity that  God Almighty wanted between creation.

This reminds me of the words of  [The Villager Poet] Rashid Salim Al Khouri ( God’s mercy be upon his soul):

O my people, this a Christian who reminds you ….

does not rise up the east, except our brotherly love

And reminds me of other words he said:

I honor  this holiday as a poet …

sailing in the verses of the holy Prophet

But I aspire to a nation’s festival …

that is liberated from the slavery of outlandish

To a weaved flag by Jesus and  Mohammad …

that shades, Aminah the sister of Mary